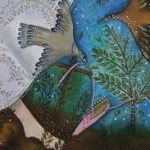 Over the years, I have taken care of countless patients (women especially) who have been rendered paralyzed and speechless by a tiny blood clot that blocked an artery in their brains. Sometimes it was not a clot but a hemorrhage that robbed them of the rest of their lives.

Barbara had suffered the former, an “ischemic stroke.”

Since the stroke ten years ago, which left one side semi-paralyzed, each day has been a struggle. Yet when I met this remarkable woman she quickly told me how thankful she was for it and that through the experience she’d met God.

I looked closely at her over my glasses, disbelieving.

She went on to tell me with twinkling eyes how before the stroke she’d been a bitter, miserable person, and that since the stroke she’d discovered that she was loved infinitely by a faithful friend who would never leave her. I was the one left speechless as I watched her spastic left hand draw up tightly into her chest.

“I have no control over it. It’s like someone else’s hand. It comes up here (on her chest) and pushes the emergency button around my neck,” she said matter of factly, watching for my response. Then she giggled at the absurdity of it and I managed a crooked smile.

She’d had her left leg amputated below the knee because a doctor said that her spastic paralysis was so severe she’d never walk on such a deformed foot and leg. They offered only one option: take off her leg and fit her for prosthesis.

The surgery and prosthesis were supposed to make it possible to walk again, but her hopes for new mobility never materialized. The leg was a crude model by today’s standards and didn’t fit her well. As if that weren’t bad enough, therapy had never been ordered. No one ever helped her learn to walk on her new leg.

Years passed with her stuck in a wheelchair.

When I met Barbara she was bravely making the best of a bum leg with great style, determination and humor. Her courage and grace inspired me to think creatively and together we started to change things.

A gentleman I knew who made state of the art prosthetic devices, arrived on the scene like a handsome prince on a white horse. His name was “Marmaduke.” Within minutes of introduction this prince of prosthetics was on bended knee fitting my Cinderella for her new leg. What he found with the old one was appalling.

Not only was the core of the old prosthesis in the process of disintegrating into sawdust (the heel of the foot fell off and crumbled in front of us) the leg itself had been set at an angle that made it nearly impossible to stand on, let alone walk on. Falls were commonplace for her.

Barbara had been told for years that she’d just have to expect such things because she was getting “old and weak.”

Now, after months of obfuscation from the managed care system, it seems we are finally on the home stretch with Cinderella. After changing physicians several times to satisfy the “right provider” stipulations, her third primary doctor’s IPO (independent physician’s organization) tried to deep-six the prosthesis and then blame the insurance company.

Instead of advocating for us they’d pushed to use their own company, which as it turned out would provide a vastly inferior prosthesis. When I discovered this I appealed to the HMO review panel and spoke with a woman who assured me that (contrary to prevailing opinions) they worked with “non-contracted” providers all the time.  As long as they accepted the Medicare allotment for the item or procedure in question, it was not a problem. It stunned me to find someone more pro-patient in the insurance sector than in the doctor’s group.

The update is that the leg has been made and now all we are waiting on is approval from the HMO, who is reviewing my appeal to the first denial. I am optimistic about it and Barbara is all a-quiver to think that there’s a chance she may walk again. I feel like the FGM, otherwise known as the “fairy godmother.”

If the leg is denied, FGM will appeal a second and third time until they give in through exasperation, but Prince Marmaduke is on the verge of giving it away. He’s given away two prostheses already in Kosovo and so he says, maybe it’s time he gives one away in this country.

It’s always good to have a secret back up plan. One way or another, this glass slipper just has to fit. A half-paralyzed Cinderella, so brave and true, simply just cannot have any other ending.

Not if the prince and I have anything to say about it.