When Love Goes the Distance in a San Diego Nursing Home 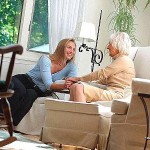 SAN DIEGO ‑ I was at the corner coffee shop yesterday when I ran into a man who I have seen over the last few years at a certain nursing home down the hill. I’d never really talked to him, though he’d been a constant presence at dinner time, helping his wife when as I sat and fed other patients in the same dining room.

As he got into his car, I asked how his wife was.

He smiled an ironic little smile something between pride and exasperation. “If you asked her she’d say she was getting better every day,” he said.

As we talked in the parking lot, I learned a lot about this couple I’d seen so often and wondered about. She had metastatic brain cancer; it had been diagnosed five years earlier and she’d been given five months to live. She paid as much attention to the prognosis as she would to a passing breeze, and went on with life on her own terms.

Five years later her husband is still coming to see her daily ‑ and not because she’s beautiful anymore or pleasant to be around. She’s crabby and looks like a turnip, but he clearly adores her.

He’s lucky enough to know that love is not the easy thing we have sentimentalized, nor the romanticized kind our Western culture idolizes, but the faithful, enduring thing that ennobles both giver and receiver.

As he spoke of his wife and their difficult journey together in recent years, this small man gained stature before my eyes until I felt insignificant beside this small giant of a human being.

He was one of the very few who do not abandon their loved ones after they’ve gone to a nursing home. In every such home there are a handful of family members ‑ sons, daughters, spouses ‑‑ who come diligently to care for their own. But for the large part, most residents of those lonely places have no one who comes to see them on a regular basis. Some never see anyone at all … even when they are dying.

Among family members who do come, those who come daily are nothing short of heroic. In many years at a nursing home, the only son who came daily to see his Dad was a fellow named Gary. I will never forget him. He was a plain‑spoken, quiet man. Earthy with a tanned and open face with big rough hands like a carpenter or farmer. I could see him up on a tractor or whispering to horses. I heard he had lots of children and was a devoted father.

His own father, now stricken with advanced Alzheimer’s, had been a contractor, and a man’s man too. Successful and used to being in charge, the disease had rendered him belligerent and occasionally violent with his caregivers.

No one could calm him like Gary. He’d take his dad by the hand and walk with him until he settled down. He sat through almost every lunch and dinner feeding him, wiping his chin. Day after day, year after year. I marveled at his consistency and his endurance.

There’ve been others over the years, but not very many.

Faithful, self‑sacrificing love ‑ our aging mothers, fathers, spouses and elders deserve nothing less. Not only will they be lost if we refuse to give it, but we will be tragically diminished as well.