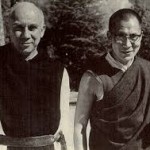 The Abbot at the Monastery was then 93 years old.

Besides one fall a couple of years ago, which broke his nose and put out some teeth, he was in good health. I met him after he read an article of mine in the local paper. He and another Abbot wanted to meet and give me their benediction.

As I headed up the hill to see him late in the afternoon, I still harbored a few assumptions: I assumed that the community of Benedictine monks he belonged to was mostly aged and that as such they’d be mostly stricken with ailments familiar to the infirm elderly.

I was wrong on both counts.

During the first part of the visit, I asked the Abbot over coffee how they handle things when the brothers get sick. An armchair sociologist, I wanted to compare aging in this monastic population to my experience of those in the secular world.

Affably he answered and changed the subject. I asked again in a different way: “When the brothers go to the hospital are they able to come back home here and … well, live until they die?” I wanted to know if they were able to attend to members who were, because of prolonged illness, frail and dependent for care. He still acted as if it were an infrequent occurrence.

I kept pressing the matter. Finally, with the patience of a man who’d dealt with the impertinence of many a novice, he offered to show me the infirmary.

We took the path through the Calla Lilies into the cloistered monastery.

Making our way through dark halls that smelled like incense and old books, the infirmary seemed deserted. I was shown three rooms, which were obviously rarely used and sparsely furnished. I kept asking about who was here to take care of the brothers when they were sick. The answer was typically vague, “Family or friends of the community.”

“But what if you needed a nurse?” I gave up trying to appear nonchalant. Well, the Abbot said, “When I fell and broke my nose there was a nurse here on retreat that night and she took care of me.” Finally giving up at the impossibility of making sickness a big issue, I said, “Maybe she was an angel.”

I could see his eyes twinkle even in the half-light of the hallway.

What I later discovered, once I’d seen the whole community of black-robed and sandaled men assembled at Mass was a community of mostly bearded, robust men with only a handful of them sporting silver hair.

In Benedictine tradition, the men who come to the monastery to live, work and pray together will stay together and never leave. There is a permanence and deep serenity in belonging to a place, a people and a tradition that is anchored to things eternal. Here even time and space are sacramental.

Here, age doesn’t seem to be important. Transcendent purpose and value continue to be assigned to each brother, no matter what their stage of life. There are no castaways; none deemed less important based on level of production or material worth.

They continue to do simple but grand things like study theology and take care of bees. They pollinate the rest of the world with their daily prayers and constant generosity. In this small monastic city overlooking the Pacific, there is such an elegant simplicity and natural vitality that sickness, rather than being the defining reality of aging, seems ephemeral.

The stark contrast with what I see most every day is breathtaking. So many old men and women in the outside world are alone, frightened, neglected. So many lack the security and warmth of human community. Many just try the best they can to be brave and tough it out. Some spend their life savings trying to find belonging in retirement homes. A few get lucky but most are crushed by disappointment and give up incrementally, every day in small invisible ways.

As a care manager, to those I am called. They cannot seem to find the hive so I try to bring the life-giving substance of the human hive to them. They make my life infinitely sweeter in return.